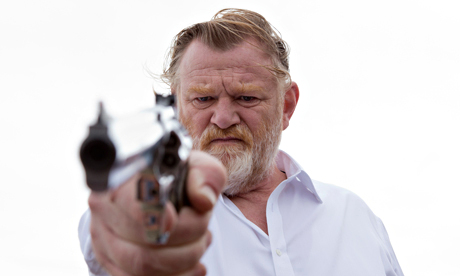 This is a challenging but very serious and thoughtful film. It has a great cast and the main character, a Catholic priest, is brilliantly acted by the wonderful Irish actor Brendon Gleeson. It is the second in a trio of independent Irish films by Mc Donagh. The first “The Guard” also set on the west coast of Ireland featured a local policeman also played by Gleeson. It was a comedy but with some dark overtones. Some theatre advertising misleadingly advertises “Calvary” also as a comedy, although not without flashes of humour it is not a comedy! We wait with eager anticipation for the third in the planned trio.

Set once again in a remote seaside village on the west coast of Ireland this film portrays the New Ireland. Made up of disillusioned cynical people who have lost their faith in the Church and many their personal faith also, they are cynical about their country and its leaders. Their lives are relationally dysfunctional and morally adrift. There’s the sad disillusioned financier whose family has deserted him and who wants some redemption from the way he has immorally amassed his fortune from Irelands pre GFC property binge, played with pathetic irony by Dylan Moran of “Black Books” fame. There’s the tired cynical cop, the bitter local doctor who is angry at God for the suffering he has seen and the desperate frustrated women.

The plot centres on the local priest Father James, a faithful, wise and good man. His protagonist is a bitter and angry victim of serial abuse in his child hood by a catholic priest. He wants revenge and has decided that only a good priest will be a sufficient sacrifice. He announces this to Father James in the confessional and so the drama unfolds over seven days. The week becomes a parable of the Stations of the Cross with Father James as the Christ figure as he endures humiliation and doubt but remains courageously to face his would be executioner. A chance encounter with a young woman and fellow believer whose steadfastness in the face of her own recent and tragic loss restores his resolve at a critical point of doubt. This minor cameo role is very significant.

In an unusual twist we find that the priest was married and then widowed before he was ordained. This gives James a depth of experience and compassion. Perhaps another critique of the Catholic Church in its unwillingness to change their position on clergy being able to marry. He has an adult but troubled daughter from his marriage who says that she felt abandoned by both her mother’s death and her father’s new vocation, “I lost two parents!” The dialogue between them as he responds to her pain is beautifully written and profound, illuminated with flashes of grace, love and humour. James comments at one stage that “forgiveness is greatly underrated” – indeed!

The ending is traumatic and there are dark themes to this frank but insightful film. It is critical of the Catholic Church but it is also viscerally honest about the human condition. In my view it is not an anti-Christian film, if anything it is a celebration of the strength and power of the Christian faith when lived out with courage and sincerity. It also raises the old and profound questions about how we find atonement for our sins and stupidity, what is the cost of redemption and where it may be rediscovered by a culture that once understood it but has lost its way.